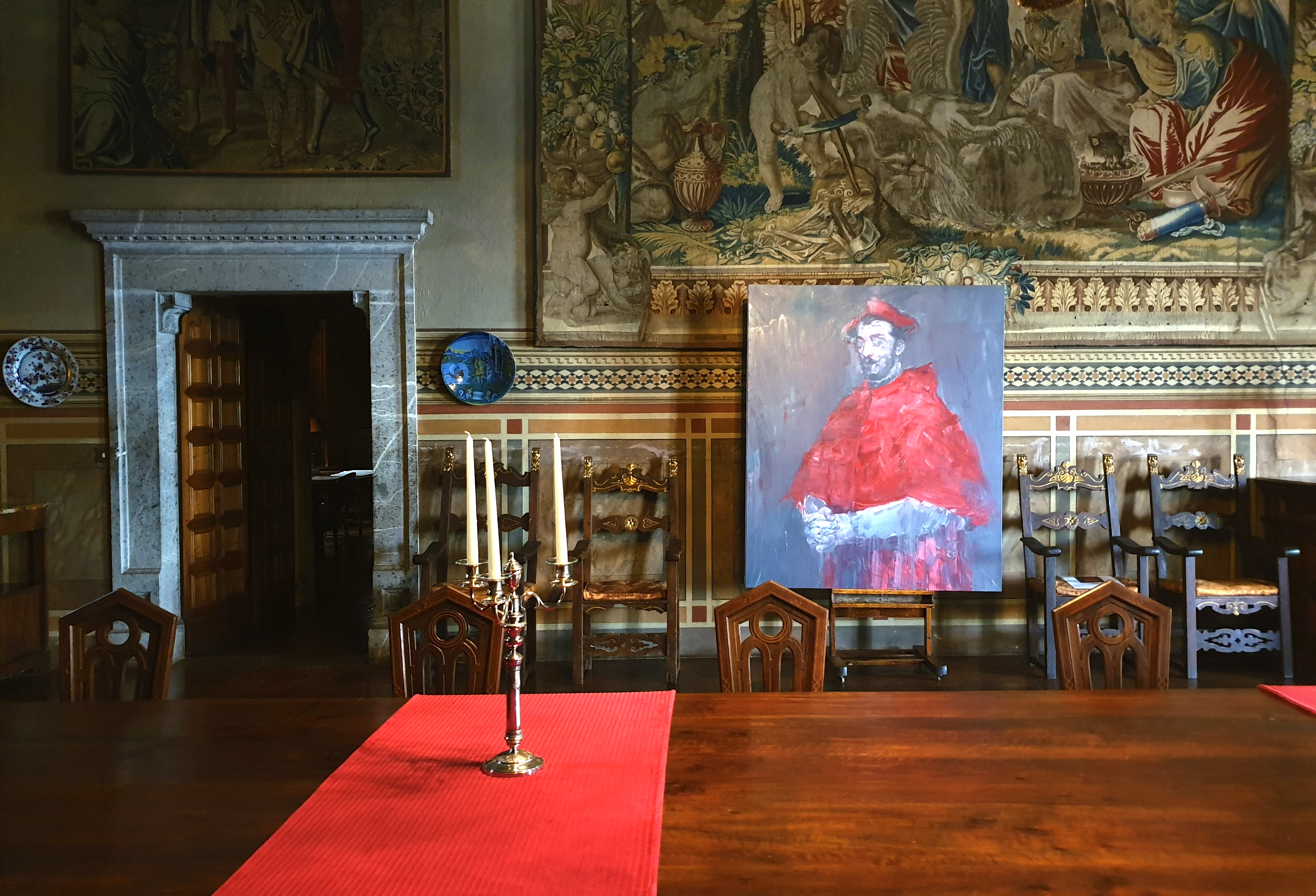 In last Thursday’s post, we announced the Art of the Treasure Hunt, the exposition of Contemporary Art coming for its fourth year to Brolio Castle with numerous installations of six different artists.

Here are some details about the works. In the principal bastion, Mark Handforth’s Tilted Shadow has been installed: this incredibly large (approx. cm 294 x 310 x 295) work from 2013, composed of stainless steel and aluminum, has kindly been loaned to the exposition Art of the Treasure Hunt by the Franco Noero gallery in Turin. By modifying both the materials and the proportions of ordinary objects, the sculptures of Mark Handforth appear serious and ironic, playful and formal, monumental and melancholic. The artist intervenes on the signs and symbols of everyday life, creating a gallery of expanded objects endowed with a wild physicality and a distinct dynamic energy. With aesthetic references to Pop and Minimal Art, his work pushes rigorous formal research into an immediately recognizable figurative dimension, and the out-sized proportions and exaggerated distortions radically transform the relationship between the viewer and the artwork. Born in Hong Kong in 1969, Mark Handforth lives and works in Miami, Florida. On the terrace in front of the Armory, the magnificent dining room of the Castle, Campetto Line by Richard Long has been installed. The sculpture was created for the first time about 15 years ago in Italy, as a synthesis of a path left in a place to dialogue with space and the cosmos through the materials from nature and the territory. The diagonal collocation on the terrace of Brolio Castle, projecting towards the Tuscan countryside, was chosen by the artist to highlight the relationship between the nature of the landscape and materials, and that of the Castle itself. Brolio Castle is a special place for its architecture and for the synthesis that takes place during the cultivation of the vineyards through wise human intervention and raw materials from nature. Richard Long is considered among the most influential proponents of the sculptural revolution beginning in the 1970s, and among the leading representatives of Land Art. Born in England in 1945, Long represented the UK at the Biennale in Venice in 1975 and has had retrospective expositions at the Guggenheim Museum in New York as well as many other prestigious museums around the world.

The works of two artists, Yahon Chang and Zheng Zhou can be found in the old wine cellar, a very atmospheric part of the Castle, where in the past the large barrels were held while the wine was aging. Born in 1948 in Shui-Li, Nantou County, Taiwan, Yahon Chang lives and works in Taipei. The artist uses Chinese ink painting techniques in highly physical and gestural ways. Using long, custom-made brushes, he creates large works on canvas and paper laid on the floor; his physical actions integrate tai chi martial arts movements. The two works at Brolio Castle are both from 2018: the installation Untitled (Poem #1) combines various ink paintings created in Palermo and overlapped in different layers which reflect the multiculturalism of that city and its complex history. The installation Untitled (Poem #4) – A brushwork swipe with tears (2018), is large, a 20-meter-long painting on linen that drapes out from the ceiling and continues along the floor. Painted in Beijing, this work is unique, simple and spontaneous. Forecast Mask by Zheng Zhou is a diptych painted in 2018. Each acrylic piece is on a canvas measuring 256 x 368 cm and has been kindly loaned to the exhibition by the artist Edouard Malingue. In Forecast Mask, a tangle of anthropomorphic forms in various shades of blue convey the necessity to grasp, represent, capture the hypnotic flow of the cosmos in the randomness of the moment. These pictorial trickles reflect the development of the artist’s identity as he passed from printing to painting, and they are a vehicle to channel his own consciousness, a declaration of breaking the yoke imposed on creativity by pedagogy. Born in China 1969, Zheng Zhou is an instinctive artist who renders his observations of the world onto canvas. Inside the orangery, where the very important vases of lemons were kept during the winter months, one can admire the works of Edson Chagas, Angolan photographer born in 1977, who represented his country at the 2013 Biennale in Venice. In that occasion, his pavilion was awarded the Golden Lion for the best national pavilion. His works explore the city and consumerism, and in his series “Found Not Taken”, the artist utilizes objects abandoned in other cities. In the series that is exhibited at the Castle, instead, he uses African masks for a greater understanding of his country, Angola. Lastly, in the dining room of the Castle, the work of Yan Pei-Ming, Cardinal Alexandre Farnese, 2017 (oil on canvas (180 x 150 x 6 cm) is exhibited, courtesy of Galerie Thaddaeus Ropac, London/Paris/Salzburg.

Yan Pei-Ming Is a Chinese painter born in 1960 in Shanghai. Since 1982 he has lived in Dijon, France. His most famous paintings are elaborate black and white or red and white portraits. This restricted chromatic range reinforces the expressive power of his paintings, conferring on them a kind of mysterious absence of gravity.

As visitors know, the interior of the Castle cannot be visited, but this work is in one of the few rooms open to the Privilege Tour.

Some of these works – those installed outside – can be admired simply by purchasing entry to the Castle Gardens at the ticket office, for which no advance booking is necessary.