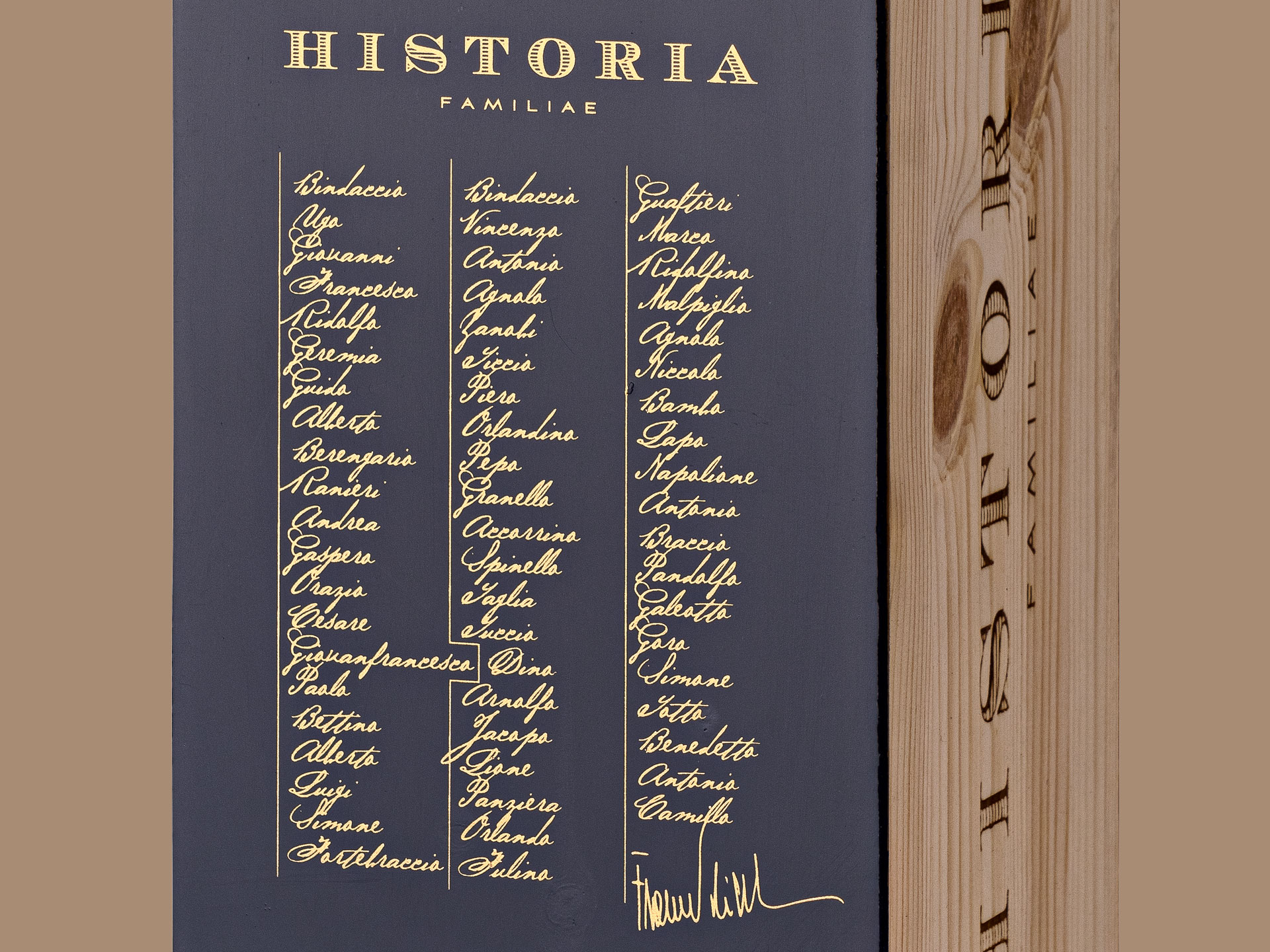 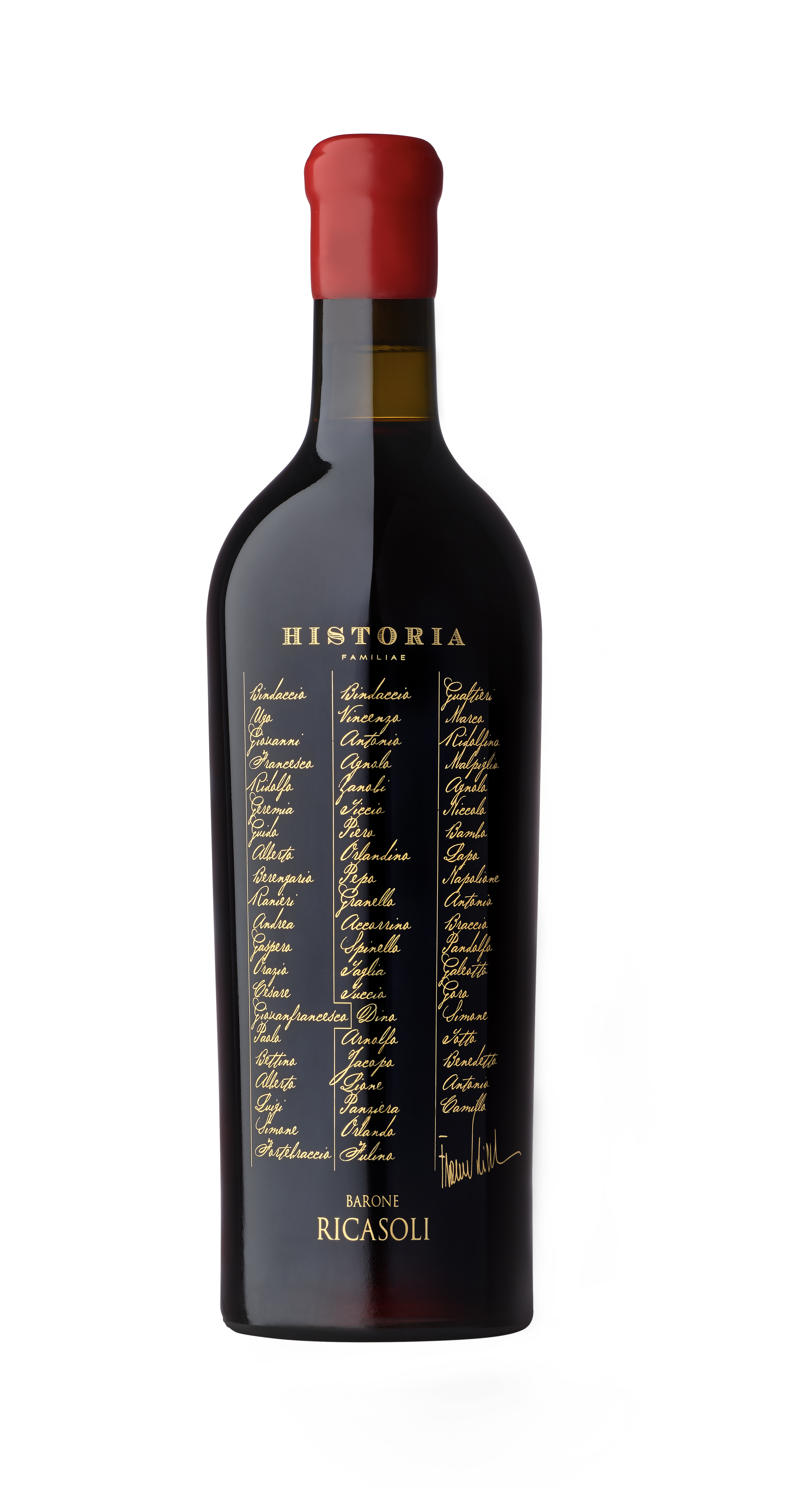 Historia Familiae (from the Latin, “history of the family”) is a limited special edition wine produced on the occasion of Francesco Ricasoli’s 20th anniversary at the helm of the company. To mark the occasion, Francesco Ricasoli wanted to pay homage “to all his ancestors who, over the centuries, have preserved Brolio’s unique historical value.”

The luxurious golden silkscreen bottle printing lists, directly on the glass, the names of 61 members of the Ricasoli family, whose records date back to the early Middle Ages, distinguished for their work. Many were warriors, others held important political offices. Their successive conquests over time created a deep and intriguing plot similar to the texture often found in the wine.

Among the names on the bottle, we like to highlight some of the people who have marked the fundamental stages that have led to what Brolio is today. Rodolfo, who is referenced in a 1076 Papal Bull, is credited with the origin of one of the family’s names “de filiis Rodulphi” (of the son of Rodolfo), in the vernacular “Firidolfi.” Ranieri, a warrior who succeeded Barbarossa, is credited with seizing the Ricasoli Castle in the Valdarno in 1187, from which the name of the main branch of the family derives.

Fundamental to the current layout of the property is Ugo who, in the 1200 estate divisions, was awarded the Brolio, Ricasoli, Cacchiano, and Vertine dominions, as well as other places in Chianti. He is regarded as the founder of Ricasoli. Bindaccio acquired the fiefdoms of La Trappola and Rocca Guicciarda, which now represent two important labels of the Ricasoli brand. He was accredited with the 1339 Brolio fortifications, whereas, in the following century, Antonio appears at the top of the Ricasoli “Barons”’ the genealogy.

Alongside the institutional roles, around 1600, the Ricasoli family began to devote increasing attention to their agricultural estate, in particular to activities connected with wine sector. Bettino, “the Iron Baron,” provided a crucial boost to wine-related activities in the nineteenth century by personally dedicating himself to the Brolio property, and alternating his political commitments with in-depth studies and experiments in viticulture throughout his life to create quality wine. He was responsible for the creating the “formula” for Chianti Classico as we know it today.

Historia Familiae is 95% Sangiovese and 5% Petit Verdot. In the words of the American critic Bruce Sanderson for the renowned magazine “Wine Spectator”, “with a rich soft texture of black cherries and currants, mineral hints, and tobacco aromas. Compact, pleasant, and vibrant in the mouth, with an unmistakable elegance.” A very successful tribute to those who have made Brolio such a lively and special land throughout history.