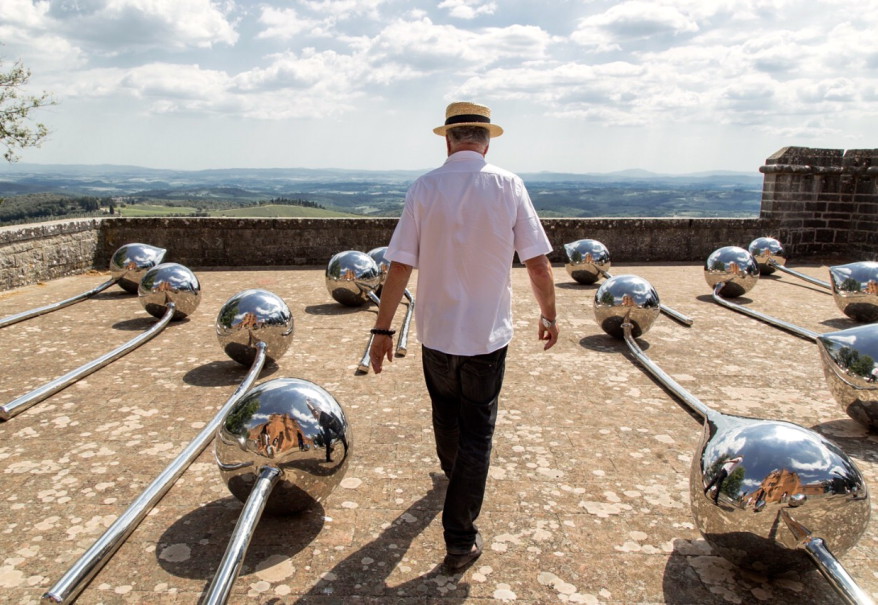 Lotus Flowers at the Castle

Once again, Brolio Castle has been chosen by a contemporary artist for an important installation.

You will remember Heinz Mack’s Silver Stele that stood out in the main bastion of the castle all last summer and into the autumn. Visible from afar, in some moments of the day it was so bright that you had to look away. This time, the installation is on the terrace in front of the Armory and it’s just as unusual as the last. Called Let a Hundred Flowers Bloom, it is a selection of 25 (the original installation had 100) stainless steel lotus flower blooms, handmade and polished, each nearly 3 meters tall, that the artist Not Vital personally installed at the castle at the end of May.

The title of the work refers to the slogan of the Hundred Flowers Campaign promoted by Mao Zedong in 1956, “let a hundred flowers bloom, and a hundred schools of thought contend”, used as a call for freedom of thought and speech within the Chinese Communist Party. It his installation, Not Vital uses clear-cut metaphors to describe this historic event. In oriental cultures, the open lotus flower symbolizes both intellectual freedom and complete fulfillment. Consequently, closed blooms symbolize the opposite; blooms that have been cut down are tangible signs of violence, and their dimension reflects the significance of the event.

But who is Not Vital?

Born in Sent, Switzerland, in 1948, he first studied in Paris and Rome and then moved to New York in 1974. He now lives and works in Sent, Beijing, Agadez and Chile. Among his many exhibitions, one which stands out was the Plateau of Humanity at the 49th Venice Biennale International Art Exhibition (2001).

Visitors have really enjoyed Let a Hundred Flowers Bloom: they look at it carefully, walk among the blooms, take photos of themselves lying among the flowers or of the castle reflected on their brilliant surfaces, and these beautiful shots are beginning to show up on many social networks.