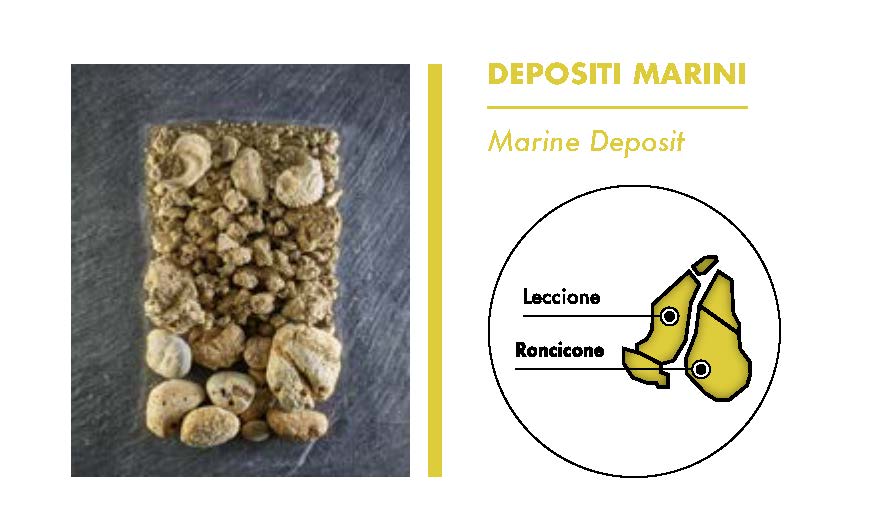 Zoning is a scientific discipline of viticulture that leads to the recognition of potentially useful elements, as well as the subdivision of the area studied based on the response of the vines to their environment and the product this generates in the glass. Francesco Ricasoli was convinced that zonation was essential at Brolio, and the result is the division of the Ricasoli vineyards according to these different potentials, identifying five types of most common soils.

Among these, the Marine Deposits soils have sandy layers and stones smoothed by the sea, with clay further down and a good content of organic substance. They are soils from which fresh and elegant wines are obtained, and they are present for example in the geological formation of the Leccione Vineyard (10.8 hectares), rich in sand, lignite, chalk and marine fossils in a particularly rare combination. Here, at 320 meters above sea level, the Sangiovese Cru Roncicone is born, which stands out for its floral freshness combined with spicy notes, persistent acidity and marked minerality. The scarce resistance of the vineyard soil allows the roots to descend very deep so as to naturally provide good tannins, and the harvested grapes give life to a pure Sangiovese cru capable of celebrating all the magnificent qualities of this variety.

But how did such a soil come to be in the heart of the Chianti Classico area? The composition and diffusion of alluvial and marine sedimentary rocks confirm the ancient presence of the sea, which occupied more than half of Tuscany, about 5 million years ago (end of the Pliocene geological period). In the glacial periods, the sea retreated leaving large areas of plains to emerge that were, at that stage, filled by the sediments of the Apennine rivers. In the interglacial phases, however, the sea reconquered the territory. The lands that at that time had already emerged are the sandy clayey ones, while the submerged ones are today calcareous soils derived from an accumulation of animal and plant remains.